For many years, Simonton Lake has been suffering from numerous problems that would ultimately affect the health of the lake. In 2015-16, the Simonton Lake Area Homeowners’ Association Environment Committee created a plan to identify the problems, the causes, possible solutions and a
priority list. The result was an official document, called the Simonton Lake Improvement Master Plan.

What is sediment and why does it need to be removed?

Sediment is the small particles of decomposing plant life that accumulate on our lake bottom.  It comes from grass clippings, leaves, animal waste and erosion of the soil.  Even if you never launch a boat or ever go from one lake to the other, you are at risk.  The sediment circulates right up to every beach on each lake.

Both the Army Corp of Engineers and the Indiana Department of Natural Resources agree that this sediment is a legitimate lake issue and will permit us to dredge down to the original lake bottom.

Our concern was the quality of water in our lake that was severely impacted by the suspension of sediment in the lake. Not only was the lake becoming shallower but boat motors re-suspended the sediment in the water.  One of the results was increased invasive weed growth.  The water quality issues were supported by a 2011 Diagnostic Study developed by JF New Associates & funded by a DNR grant. The solution, supported by the Indiana DNR was to dredge.

It became apparent that dredging would need to be broken into segments. The money required to complete the entire 55,000 cubic yards of the plan was not available all at once. The Environmental Committee was charged with prioritizing the proposed dredging sites into manageable phases according to need and getting the most bang for our bucks. The 20 member committee met many times and after much spirited debate, adopted a plan which divided the dredging into 5 Phases.  Phase 1, 2 and 3 were conducted by the Simonton Lake Area Homeowners’ Association.

The FIRST PHASE was completed in 2015 and funded by the Indiana Department of Natural Resources, a grant from the Community Foundation of Elkhart County, private donations of residents.

The SECOND PHASE was completed in 2017 and was funded by an additional grant from the Indiana Department of Natural Resources.

The THIRD PHASE was funded by a grant from the Elkhart County Storm Water Board MS4 Fund.  This Phase was 65% complete at the end of 2018. Dredging on Phase Three will resume in mid-September and will be completed by the end of 2019.

The Simonton Lake Conservancy has managed our sewer system for the last 20 years.  Two years ago through a legal process the Conservancy was given charge of: improving drainage, developing forests, wildlife areas, parks and recreational facilities, preventing erosion, and the operation, maintenance and improvement of any work of improvements for water-based recreational purposes (Dredging, Water Quality, Weed Control)

Because of this legal change any future dredging projects will be managed by the Conservancy using tax dollars.

Are there any dredging projects left to be done?

There are several areas identified for dredging in the Master Plan which include:

Any dredging done beyond 2019 will be managed and paid for by the Simonton Lake Conservancy District. 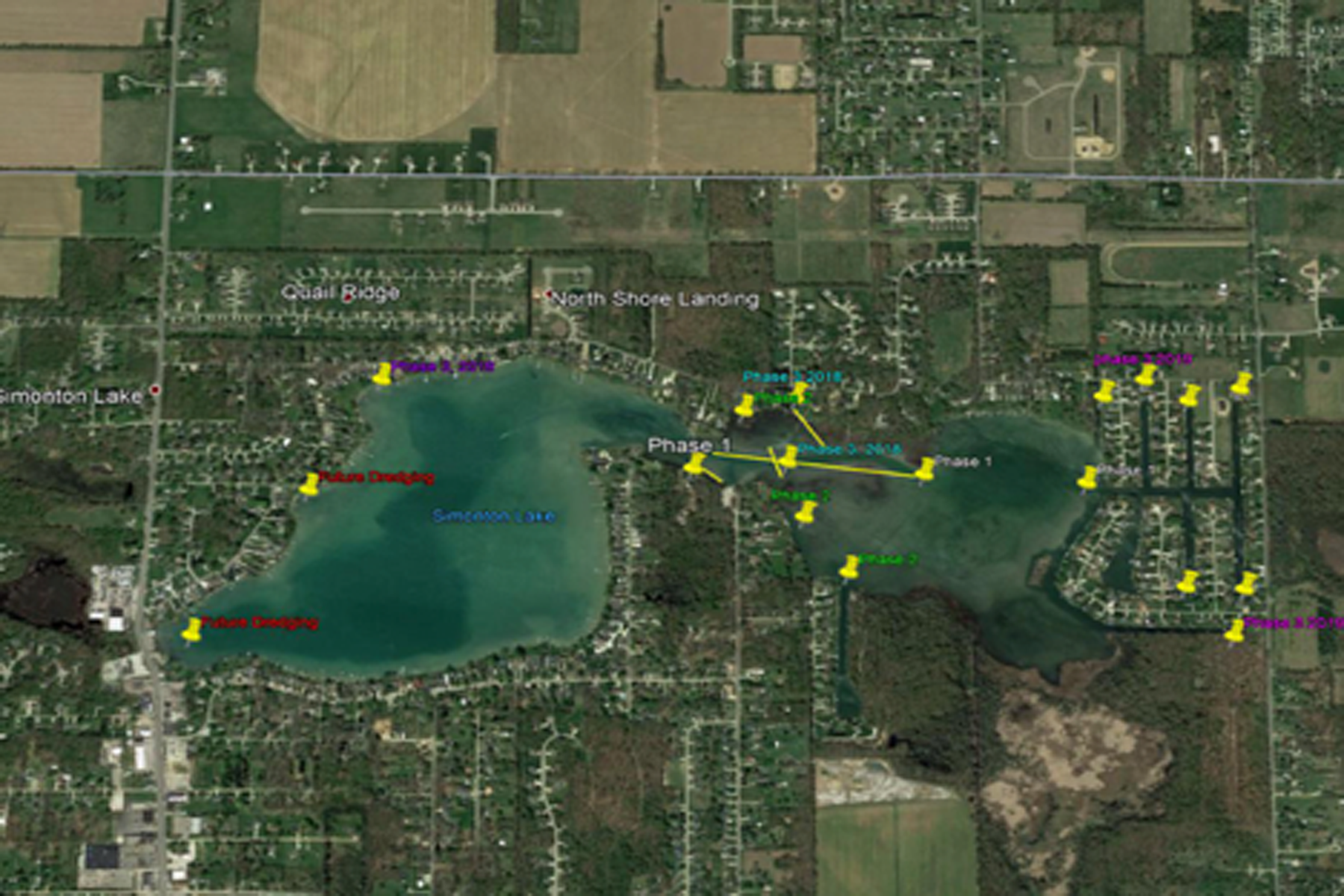 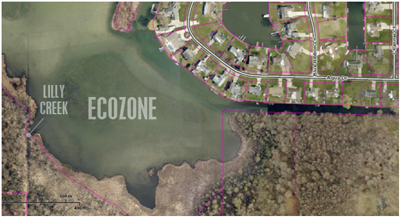 Simonton Lake is a spring-fed lake, there are no rivers or streams that flow in to the lake.  But, there is a creek that empties the lake.  Lilly Creek, also known as Lilly Ditch and Osolo Ditch can be found near the ecozone on the southeast border of the small basin.  From there the creek flows southwards and empties into the St. Joe River in Elkhart.  During droughts the level of the lake drops to a dangerous level as water from the lake flows out through Lilly Creek.

What is a Weir?

A weir is a barrier across a river designed to alter its flow characteristics. In most cases, weirs take the form of obstructions smaller than most conventional dams, pooling water behind them while also allowing it to flow steadily over their tops. Weirs are commonly used to alter the flow of rivers to prevent flooding, measure discharge, and help render rivers navigable.  In the case of the Lilly Creek Weir, the purpose would be to protect the level of water in the lake.  When the water is high, the excess water would flow over the top of the weir.  In times of drought when the water is low, the weir would prevent water from leaving the lake until the level of the lake reaches the legal lake level.

History of the Project

On August 2, 1996 the Elkhart County Drainage Board applied for a permit to dredge

Miller Street is located just north of the Greenleaf Estates and Eastlake Estates subdivisions in the City of Elkhart. This was the beginning of a twenty year-long effort to place a weir at the creek to protect the level of water at Simonton Lake.

The initial plan that was proposed was that the Elkhart County Drainage Board would construct a weir in the ditch to allow dredging of the ditch no closer than ¾ mile from the lake. This would prevent water rushing out of the lake as the ditch was dredged.   The weir was to be constructed to a certain elevation.  But, the level prescribed was 10” lower than the existing water level of the lake.  So, it was decided to investigate changing the legal lake level number to represent the water level using the last 10 year averages.

through the level change process. On May 5th, 2006 Judge George Biddlecome of Elkhart Superior Court #3 ordered that the petition to establish the new lake level be granted.  But, then a process began on who would pay for the construction of the weir.

Finally, on February 5th 2016 Elkhart County Superior Court Judge Cataldo ruled that the Elkhart County Drainage Board would pay 50% of the construction costs not to exceed the amount of $78,478.00.

If the project exceeded the maximum amount of $156,956.00 the County would pay the additional money.

In May 2016 the Drainage Board opened the sealed bids for construction, only to discover that there was only one bid and that bid was for more than twice the estimate.  This bid fell far outside the range of the current funding capacity.  The reason for the extreme difference in the bid and the estimate was due to the unusually wet spring and the lake level trending unusually high.  The weir construction site was virtually inaccessible without employing costly construction techniques.  All equipment and materials would have to be transported through an extremely marshy area.

It was determined by the board, since the summer weather forecast was for an unusually hot and dry summer, they would wait until July and rebid the contract.  The County Surveyor also suggested that the county might attempt to clear some of the vegetation in Lilly Creek that is restricting the flow in order to help lower the lake level. As predicted the summer of 2016 was hot and dry and the lake level did fall by a few inches.

On July 12, 2016 the Elkhart County Drainage Board met and approved a bid for the weir. Work began in early August 2016.

To date the weir has worked as we had planned.  It keeps water from draining from the lake in times of drought but allows water above the legal lake level to drain from the lake in wet weather.  In 2019 it appeared that the creek was not draining as well.  The County Drainage Board voted to proceed with permits to clean out the vegetation that was slowing down the flow of water. 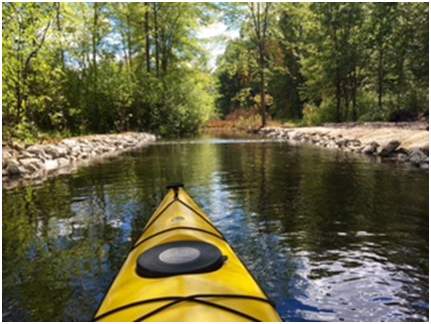 Approach to the weir down the newly dredged Lilly Creek 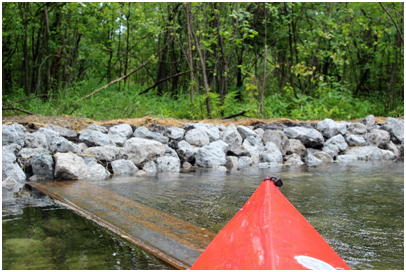 The top of the weir as it breaks the surface of the water.

In 2011 a Lake Diagnostic Feasibility Study was completed by the State of Indiana for Simonton Lake.  The water quality in the lake was determined to be very good.  However, several recommendations were made to continue to improve the water quality.

One of these recommendations was the establishment of an Ecozone.

Per Indiana Code IC 14-15-7-3 an “Ecozone” designates an area where motorized water craft are limited.  Ecozones include wetlands, marshes and shallow areas.  Areas like these not only provide a habitat for fish and wildlife but also filter nutrients and sediments that hurt water quality and they recharge groundwater.  Ecozones act as self-sustaining fish nurseries. Lakes that do not protect these areas find their water quality in danger.  Scientists tell us without human beings on lakes the disappearance of these essential features might never happen.  But, when humans collide with a lake ecosystem there can be problems.

The biggest culprit in the destruction of wetlands, marshes and shallow areas is motorized watercraft.  Boat motors disturb the bottom, cut up plants and create wakes that throw sediment onto wetland plants making it difficult or impossible to grow.  Bedding areas for fish are disturbed.

The residents of Simonton Lake area do want to protect our lake.  The health of the lake affects the entire watershed. So, it was with this intention that the Board of Directors of the Simonton Lake Area Homeowners Association pursued the establishment of an Ecozone.

In June of 2012 a committee was established and began working with Doug Keller, Aquatic Habitat Coordinator for the Indiana DNR.

While the Indiana Code creating Ecozones was enacted in 2002, to date only Syracuse Lake, Lake Wawasee, and Tippecanoe Lake have acted.  Finding a model to follow was limited.

A public meeting was held in August of 2012 to educate local residents and illuminate the official process by which an Ecozone could be established.  A second purpose for this public meeting was for DNR officials to gage whether local residents were in favor of the project.  Without public support the DNR officials were leery of beginning a lengthy and labor intensive process.

With good attendance and positive feedback we proceeded to determine local options for our Ecozone, including speed limit, restrictions for motorized boats, anchoring and boundaries.

Restrictions in our Ecozone

The State of Indiana allows the residents of lakes establishing Ecozones to establish some rules. 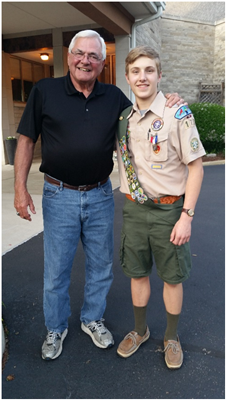 We determined that a shallow bay at the southeastern edge of Little Simonton Lake would be our site and laid out a specific boundary. Our formal proposal was submitted to the DNR in October of 2013.  Final approval came in January of 2014.

In 2016 the Ecozone was marked by special buoys provided by the DNR.  Buoys and anchors were created by Committee Member Bob Evans and Eagle Scout Candidate, Carl Horvath. 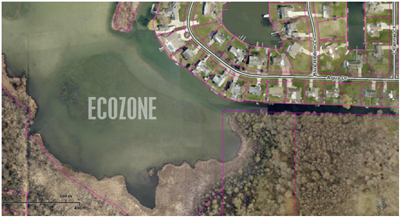 The Simonton Lake Ecozone is surrounded by wetlands and is home to eagles, fox and deer.  This quiet corner of the lake is a wonderful place to kayak.  But, most importantly the ecozone is protecting and enhancing the water quality, and thus the life, of the lake we love.

The original establishment of our Ecozone was temporary and had to be reviewed to make the law permanent.  In 2019 that process, to make the Ecozone permanent, was begun.

The most invasive weed species in Indiana are:

Learn to Identify These Weeds

Be watchful at your own pier or as you boat.  These weeds, left untreated, can displace the good aquatic plants, interfere with fish species and other aquatic animals and can upset the ecology of the lake.

Report to the Environment Committee

Contact a member of the Environmental Committee to report sightings.

What you Can Do to Control Weeds

Some residents fight invasive and nuisance weeds by cooperatively hiring an aquatic weed control company.  Great care must be taken to put only appropriate chemicals in the lake.  State law limits the area sprayed.  Check with the Indiana DNR before you spray. While you might feel like putting Round Up in the lake, please don’t!

In 2017 the Simonton Lake Conservancy District added weed control to its purposes.  Tax dollars are now used to fund an invasive weed control program.  Areas affected are sprayed twice a year.
While this removes the need for individuals to spray weeds near their property, it does not remove the need for all of us to be able to identify and report infestations.